← My Press Card has finally turned up!
Lesser Black Back Gull → 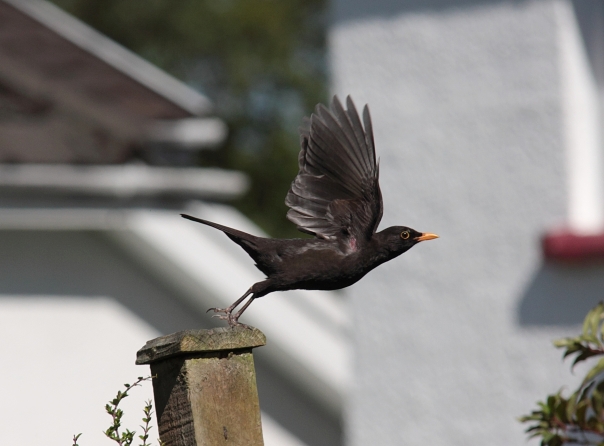 The Blackbird is a common bird found in country side to suburban gardens the RSPB states there are Approximately 4,935,000 pairs (2010) in the U.K .

I was interested in this project as the focus was to be on suburban wildlife; in particular birds.

The blackbird is a medium sized bird with the male living up to its namesake where as the female does not as she is brown with a mottled chest.

Their diet consists of insect, invertebrates and berries; although I have seen them feed on young amphibians (Rana temporaria).

They are a common bird and so easy to locate which is further aided by their distinctive call.

It has taken me many months of being around with my camera for the subject to allow me so close without the use of a hide. This allowed me to get intimate images without the need for more expensive long telephoto lenses.

The image was taken with a Canon 50d and a Sigma 70-200 2.8 lens. I used a aperture of f8. To maintain detail that may have been lost at a faster aperture over the full 200mm focal length. It was a bright day so I was able to keep the ISO at 400 so as not to introduce to much digital noise to the image. I used a very fast shutter speed so as to freeze the movement made by the bird as it took off. This gives a very detailed example of the birds posture as it is about to fly and also allow a clear view of the birds Secondary and primary flight feathers as well as its axillary feathers.

I was pleased with this shot as I feel although being frozen movement it clearly shows the movement of the bird and also the way in which the wing is constructed. I feel that the setting of shot with houses to the back and a fence post shows the kind of environment you would expect the bird to be in. To me it was the image that stood out from a group of images which I have taken of this Bird.

Posted on July 17, 2011, in Wildlife. Bookmark the permalink. Leave a comment.

← My Press Card has finally turned up!
Lesser Black Back Gull →